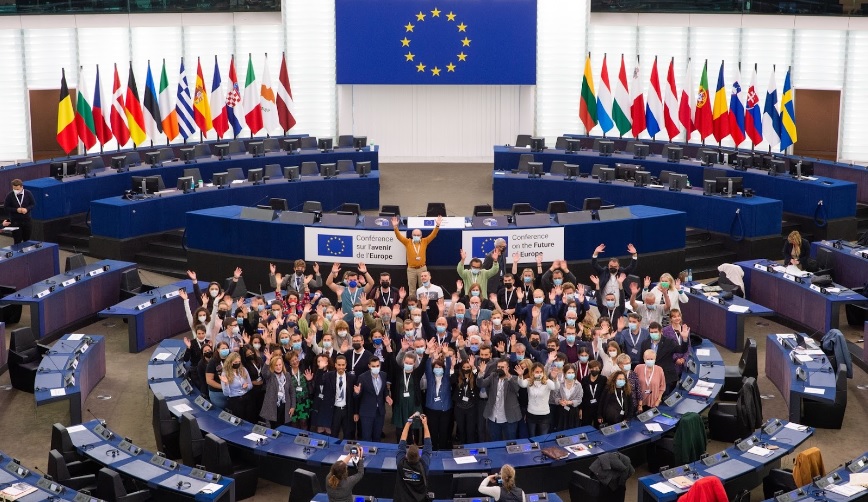 Dr. Anastasia Deligiaouri participates in Plenary of the Conference on the Future of Europe

Dr. Anastasia Deligiaouri (Dublin City University) participated in the 4th Plenary of the ongoing Conference on the Future of Europe, held on March 11 and 12 at the European Parliament (EP) in Strasbourg. Participants included EU officials, politicians from member states, representatives of European Citizens Panels, related National Panels and Civil Society representatives. The spokespersons from European and National panels have presented their recommendations, and discussions on the way forward ensued. A press release of the EP on the Plenary is available here, and Dr. Deligiaouri’s own full account is found below.

The 4th Plenary of the ongoing Conference on the Future of Europe took place on the 11th and 12 of March 2022 at the European Parliament in Strasbourg. There were 5 plenaries overall with the following topics: l “Youth, Education and Culture”, II.“EU in the world” III. “Stronger Economy, social justice and jobs”, IV. “Digital transformation”, and “IV Migration”. There was a variety of voices heard at the hemicycle of the European Parliament among officials of the EU from the institutions (also from the Committee of Regions, EESC), politicians from member states, representatives of European Citizens Panels  (1 and 4), related National Panels and Civil Society representatives. The spokespersons from European and National panels have presented their recommendations which were also handed out to the participants upon their entry at the European Parliament. For the plenaries of I, III, IV 48 Recommendations were submitted along 5 streams and for the plenaries II and V there was a total of 40 Recommendations divided in 4 streams (and sub streams consequently).

As the title of the conference reflects, the discussions were focused on the way ahead, on what the future holds for the EU and its citizens, which policies should be implemented and which are the preconditions to be met to further and advance European integration. But there is nothing that can be envisaged for the future if we don’t take stock of the present and the past. This ‘learning from the past’ approach was evident in many talks as speakers were evaluating the current conditions before proceeding to recommendations for ways to improve them. Citizens representatives have frequently made specific hints for more efficiency and speed in the decision making process in the EU. They have underlining the need for the EU to address the critical problems in correspondence with the democratic potential and legacy of the EU and deliver solutions that are “worthy of the values of the EU”.

The 4th Plenary has started with introductory talks by the Chairs of the Conference and one minute silence for solidarity for Ukraine. In the two days of the 4th Plenary the discussions were evidently, as expected, affected from the shadow of war in Ukraine. We have witnessed speeches from members of the conference emotionally loaded  asking for solutions to stop the war and ways to provide humanitarian help to the people fleeing Ukraine. A delegation from Ukraine has started the works of the second plenary (‘EU in the world”) on Friday. Ukrainian delegates have described the situation and asked for concrete actions from the EU. The plenary has expressed solidarity for Ukraine and discussions have pointed out to the implications and impact of the war on Europe and on the European project and the need to effective measures.

The talks and interventions have mainly evolved around the Recommendations but with a view on the war in Ukraine. Speakers preferred short talks, except from few talks ,mainly from the Council, that were longer and more analytical in their argumentation. There were many interventions by using the so called “blue card” which allows a participant to address a question to one of the speakers. Another important element was the hybrid form of deliberations among the onsite participants and those intervening or delivering a talk online.

The discussions have focused in many aspects of the European project and how Europeans and especially young Europeans can strengthen their European identity. Proposals for harmonization of educational programs in the EU, mutual recognition of professional degrees and promotion of multilingualism were among the main topics on which speakers focused their interventions. Speakers have extensively commented on the importance of cultural diversity and social exchanges across the EU that would enhance the European identity of citizens and create feelings of togetherness and cohesion.

The digital transformation was a focal point at the relevant plenary and was associated with the need for ethical transformation as we have to ensure that “no one is left behind”.  The the development of soft and digital skills were discussed as critical factors for effective inclusion in the labour market and also for equality of access to the digital world. At the same plenary speakers were concerned with cyber security issues the dangers associated with the use of Internet and the impact of excessive screen time for children and youngsters. In particular, fake news and disinformation were underlined as problems that need urgent action either by the means of legislation for social media companies or with the aid of an independent digital platform that could rate information and operate under public scrutiny and transparency. Despite any ‘technical’ means to tackle disinformation the critical thinking of citizens through education and training were emphasised as essential factors for citizens to become more aware and better equipped to identify false information. To this extent the importance of developing media literacy was one of the much needed skills that was considered by speakers as essential and a priority.

In relation to the topics of the “EU in the world” and “Migration” much emphasis was placed on the need for self-reliance and stability in EU and an EU which, in the future will be energy autonomous and thus more ready to respond to challenges. Main key words in these topics were liberty, peace, security, justice, human rights, democratic values, strategic autonomy. Some interventions referred to how well the Dublin System for asylum seekers works, the possibility of a future “Joint Armed Forces of the European Union” for self-defence purposes and the importance of establishing reception facilities for refugees at member states with minimum standards that will respect human rights and quick relocation of refugees to members states to avoid overburdening countries that due to their geographical location tend to receive more refugees. There was also a recommendation for ways to facilitate the integration of refugees to the local communities. Finally, among other interesting points, the proposal for an “all of Europe” approach in terms of asylum and immigration policy was brought forward as an essential step and policy for the EU in order to face existing and forthcoming migration flows with one voice. Notably, the “migration “ plenary was the one which has presented the most controversy something that probably reflects the array of different aspects and approaches with regard to migration. However, the need to reform migration policy was a common thread in the proposals of speakers.

Another important and recurring element in the speeches, which was already noted by scholars of EU studies, as a decisive point for the success the CoFoE, was the strong anxiety and concern on behalf of citizens on how their Recommendations will be taken into account from the Joint Presidency of the CoFoE (which consists of the Council, the European Parliament and the European Commission). Citizens have specifically proposed to the Chairs of the CoFoE to take into consideration their Recommendations before the expected date of the 9th of May 2022 so as for citizens to have a say at the final documents. This claim shows the importance to secure a transparent and democratically accountable way to evaluate the outcomes of the conference and the necessity for the conference to produce meaningful and tangible results if it aims to be a successful initiative.

In general, the impression I had  as an academic observer of the long sought CoFoE  and its 4th plenary was a positive one. It was the first time I have witnessed at a European level a large scale official participatory exercise with deliberations among different participants, representatives and stakeholders. Although the exchanges among participants were more akin to parliamentary discourse with targeted presentations and short interventions, we could trace elements of a deliberative discourse in which the principles of respect, reciprocity, equality could be observed. Justification was not present in all talks  but talks had the Recommendations as reference point thus someone could look for the reasons for each recommendation at the relevant booklet or online. Certainly there is lot of space for improvement and we also wish that this is not an one-off initiative. Nevertheless, apart from the CoFoE being the major participatory exercise so far in the EU, it also constitutes a major learning exercise on how the European project can be grounded on and insulated with a bottom up approach where citizens have a strong say and involvement and can pave the way for a more democratic and inclusive EU. The next big challenge is how this hard work done by citizens in different configurations which has led to the Recommendations will be addressed by the components of the CoFoE that are entitled to make decisions.