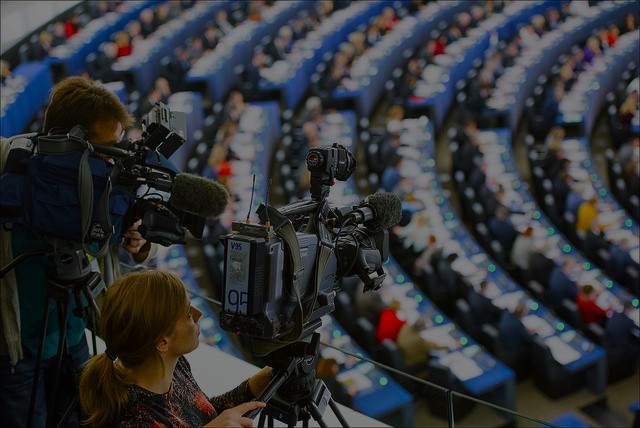 Introducing the project for a public audience, Dr. Lokot explained what drives our research activities and the project’s aim. “The project is very rich because it relies on a solid and innovative theoretical framework, and combines several different methods to triangulate the data that we are collecting,” she noted. The different phases of research (desk research, media analysis, interviews, surveys and deliberative discussions in each target country) have been and will continue feeding the entire process until the project’s due conclusion, by the end of 2024, Dr. Lokot explained, as the panel’s contributors would present results of the media analysis phase while already conducting interviews.

“The process has been really challenging because Russia’s invasion of Ukraine has introduced this new boom in discourses on Europe in the media,” Dr. Lokot highlighted, a note reiterated throughout the panel. As the media analysis phase was already ongoing by February 24, the date of the actual invasion, the researchers were quick to react (read the statement here) and to adapt their activity to give due attention to the matter in the analysis. 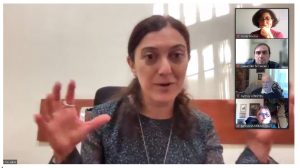 Next, Dr. Tsuladze summarized the media sampling criteria and the methods used in the MEDIATIZED EU teams’ analysis of national outlets, as well as the results of media analysis in Georgia. She explained that: quantitative content analysis entailed identifying dominant discourses, and based on that, the dominant actors voicing them (in an actor-discourse constellation), discursive units, and dominant / adjacent discourses that reinforce them, as well as counter-discourses; qualitative content analysis focused on a thematic analysis to identify what is in these discourses; critical discourse analysis was developed to understand how these discourses have been constructed and influenced the audiences; and finally, the Foucauldian framework, applied to identify different discursive practices.

Dr. Tsuladze then presented results of the Georgian case-study, starting by the identification of the dominant discourses. For instance, she explained that the accusation that either the Government or the Opposition are “deviating from the European course” rank in first and second places among them. Evidently, Dr. Tsuladze remarks, the political polarization translates into the media’s polarization in Georgia, and European integration makes one of the key themes contributing to both the political and media polarization in the country. Moreover, certain deviation discourses vis-à-vis the EU normative discourse were also found in all the cases analyzed.

Addressing the Estonian case, Dr. Pilvre-Storgard explained that the team analyzed over 3,000 items in several media, including a Russian-language outlet. Focusing on the outlets identified as Eurosceptic, she stressed that these are to be taken seriously given their influence in the political sphere, with the rise of conservative, xenophobic, and anti-liberal political forces of strong anti-establishment and anti-European discourses. At the same time, the Russian mainstream media was found to be very pro-European, “loyal to the State and the EU”, posing scarcely any questions that could be seen as “unloyal”.

Pro-European discourses in the Estonian media analyzed touch upon identity and pragmatic factors like democracy, human rights and security, Dr. Pilvre-Storgard reports, whereas anti-European discourses are framed as an opposition between conservative/religious and liberal/democratic views, with thematic relevance given to environmental and migration issues, for instance. In all, she noted, mainstream publications are overwhelmingly pro-European, with a democratic discussion held with critics of the EU, whereas “anti-European media and discourses are clearly marginalized”.

Dr. Boulos then discussed the results of Spain’s case, noting that the country had been deemed “a poster-case” of Europeanization. Joining the European Community was viewed as the path to democratization and modernization, and as an opportunity to overcome isolation after decades of dictatorship, whereas fears of peripheralization were also remarked. She also explained that at the national level, the two main contending political camps headed by the People’s Party and the Socialist Party, despite promoting  different models  for constructing the EU, in practical terms both promoted the discourse that there is need for more, not “less Europe”. The Eurozone crisis and the immigration crisis contributed to the emergence of new political parties, Podemos and Vox. Podemos presented itself as an alternative to the left and Vox as an alternative to right.  While both parties emphasized their support of Europeanization, at times (and inconsistently) they adopted a critical stance towards the EU. 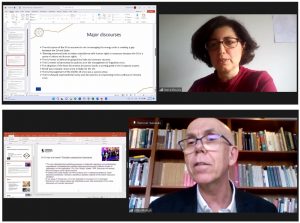 Among the Spanish case’s main discourses found in media analysis, Dr. Boulos listed a few that asserted the EU’s need to “defend its geopolitical role and common security” as well as to use the recovery funds “to induce compliance with human rights”, whereas positive and assertive statements on the EU’s performance covered themes such as its management of the pandemic and its “unity and decisiveness” vis-à-vis the crisis in Ukraine.

Finally, drawing elements of comparison between these and the other three case-studies in MEDIATIZED EU (Portugal, Ireland and Belgium), Dr. Melegh suggested some conceptualizations of comparing dominant discourses found in the media, such as “dislocatedness” or the idea of being “at home” in the EU or in Europe. In other words, based on previous literature,  he suggested looking for discursive strategies about who should move in what direction within the EU/Europe and nation linkages.

Dr. Melegh concluded by saying that the researchers should analyze the “conversation” between “modalities of ‘homeness’” as seen from the EU and the national perspectives, observing strategies of inclusion and exclusion, as well as the discursive maintenance of a East / West and North / South hierarchy that “reflect and organize the discursive field”. During the presentation, various discursive strategies were identified and typified, which need further attention.

These ideas and the comparative framework will be debated and worked out throughout the project’s  development and will reflect in upcoming research results to be disseminated. The panel ended with a productive Q&A and comments that further explored the researchers’ takes and which will contribute to that development.

The video-recording of the session will soon be available on this post.